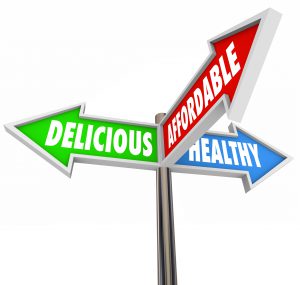 To be honest the story started one Friday morning when I was shopping at the Kollel Chabad market because it’s the cheapest supermarket in town. I spend less money there because there are not so many choices; it’s exactly the opposite of the kind of supermarket that I grew up with.

I grew up with the kind of market where, when you want to go get some salsa, you have literally 100 choices and you’ve got to walk down an aisle the size of a football field to look at all those salsas running down the center of the lane like a stripe, surrounded by chips of every possible color, shape and size.

But where I was on that Friday is very different; this is the supermarket where people go when they’re trying to save money; there are no deliveries, it’s just the basics, and I’ll tell you the truth: I was feeling a little down that day. It wasn’t anything serious, it was just sort of this feeling like everything is always going to stay the same.

I wasn’t feeling so positive, but I decided instead of fighting it or being afraid that I’m going to fall into a deep hole if I feel the hard feelings, I’m going to let myself feel my feelings and give myself the validation that it’s not always easy. You know, I shed a few tears and kept on moving. 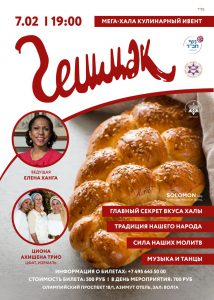 And that’s why I was so stunned when a couple of hours later everything suddenly changed; I got a text message from Moscow, inviting me to come and perform for a group of women there, at a giant Challah bake. I had done it once before, four years ago, and it was an amazing experience.

Now I felt as if G-d was standing over my shoulder saying “you know what my darling beautiful Tziona you’re giving and you’re giving and you’re tired and you don’t feel very supported some of the time.  Even lonely sometimes, but I want you to know that I’m running this world and if I want to make you my special Moscow princess that’s what’s going to happen.”

And I suddenly felt so happy and I wanted to share it with my dear friends, and I invited Sharona to join me drumming and dancing, and Miri on flute who had just broken her leg but was going to come anyway, and Chava Rachel on violin who I hadn’t seen for a while and she just had a big birthday.

I was discussing everything with my 13-year-old daughter and she said she wanted to go so badly, and I was thinking, yeah right. Then a couple of minutes later they called back from Moscow asking if any of us had a child who does music, and when I told them my daughter is in an amazing singer, they invited her along as well.

A few rehearsals later, and with my mom by us for a visit and watching the other kids, we were ready to go. We basically bundled together every warm thing we could possibly find, as we heard that it was the hardest winter in Moscow in like 50 years or something (which is saying a lot).

At the last minute Sharona was sick, and we thought she wasn’t going to be able to come, and Miri there, she was on one crutch trekking through the snow and ice, through fire and water to get to the gig. It was very exciting and the first thing we did when we arrived in Moscow was that the taxi driver dropped us off at the wrong place, and while we were waiting for them to open the door we were COLD.

And any millimetre of our bodies that were not covered with many layers started to literally freeze.  I went running after the cab driver before he drove away, and they brought us into this beautiful palace where we were staying, and we were so comfortable and cozy and feeling so good. And you know every time we turned around there was another beautiful meal on another gorgeous table and we were just feeling so warm in the loving care of this beautiful Chabad family.

The next day they took us out to the Jewish Museum. There was like 5 feet of snow outside. It was funny to see kids being dragged around on sledges instead of pushed in strollers because of the snow. The playgrounds were covered with so many layers of snow and filled with kids playing, there were trenches dug around the swings, so the kids could still swing, and everybody just kept going even though it was cold with a ton of snow.

https://www.jewish-museum.ru/en/The Jewish Museum is beautiful, impressive, and some scary stuff, like a picture of the haunted eyes of a young woman recovering in the hospital after a pogrom. We got a sense of what the Jewish people were facing through the history of Russia and the communist revolution; basically, they were faced with a choice of dying or joining the revolution.

Becoming a communist meant leaving Torah and Judaism behind, leaving their spirituality and their faith behind, and devoting themselves to a cause that gave them some opportunities but didn’t give them the opportunity to be who they really were. It felt like an incredible privilege to be flown from the land of Israel to Moscow, to do a huge concert for the women who are in the generations after this painful history, who are often hungry and thirsty for Torah.

I was aware that we were there to offer them something that could cut through all the barriers and all the hurts and all the numbness the all the protections around the heart that were built over generations of struggling to survive. Through all the discrimination, and pogroms, and devastation; and somehow, we might reach the spark that is in the heart of every Jewish person, which is still there and can never be quenched.

It felt like an incredible privilege and I felt so blessed to be there. That night the event sold out!  They sold at least 420 tickets and each one of those women made her own Challah, and there was something that broke out in that room, a power, like a wave of energy, and the next thing we knew there was this crowd of Jewish women dancing together, and whatever had been holding them back, or making them feel like maybe they are not a part of Judaism because they don’t know the words or the songs or the traditions, that was gone.

The music broke through those barriers and melted the ice around those hearts, and it was thrilling to see the women just dancing with so much energy and so much love. It was like there was a light, a great fire that was just waiting to be kindled and reach the sky and the heavens.   I’m sure it shook the heavens, and my hand started to get tired on the guitar after about 25 minutes of this because we were just having to play full energy to keep up with these women. 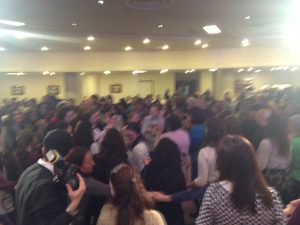 I had hoped that, at some point, the concert would turn into a great dance party, but I didn’t think it would happen the second we started playing. As an artist I have an idea of how I want things to sound, a set list, a vision; but sometimes G-d has another plan and all we can do is go along with it. It was such a refined kind of joy to see my daughter there by my side and watch a power that can’t be tamed explode in front of our eyes, to the beat of our song.

What can I say?  Give praise to G-d for He is good; His kindness is forever. A week or so later, and I am in Tel Aviv, performing in front of 2000+ women at a dance party in a club with DJ Dali and Noa Yaron. Everything about this environment is different: from the elegant hotel in Moscow and the warm toilet seat in the Jewish Museum, to the gritty Tel Aviv club and wildly dressed Israeli women out to party, it seems that wherever we go, whoever we are, the Jewish women have something inside of us that always goes back to the dance. It always goes back to the circle.

It always goes back to a place that cannot be tamed; something wild inside of us waiting for the moment when it can go free. There at Oman 17 in Tel Aviv, there were costumes, dance music, drinking; but again, I saw that same power moving.  The same force; the same quickening: racing through the hearts, turning through the circle of Jewish women.

Whatever we look like, whatever our background, underneath there is a wildness running through all of us waiting for the tiny spark to turn to a blaze. It is a joy and a privilege to get to be part of the soundtrack of this symphony. I’m all for the conductor. I’m All Yours!