By Tziona Achishena
Is Jewish music evolving? As an anthropologist and professional Jewish musician, I may be uniquely qualified to address the question of the evolution of Jewish music. Or maybe not. I am guilty, after all, of including this Meir Kay video on this post. Pure silliness.

But before you decide we are devolving (G-d forbid), remember that sometimes laughter is the best medicine. And since hope is indigenous to Judaism, we won’t give up that easily on thousands of years of Jewish tradition.

Evolution implies an adaptation to changing circumstances to ensure the survival of a species. If we look back at the roots of Jewish music, its purpose and context, we will be more prepared to judge whether Jewish music is part of an adaptation process for changing circumstances to facilitate survival. And could it be that we are actually getting better?

One of the most inspiring pieces of writing on Jewish music that I have found is by Rabbi Avraham Sutton in his (still unpublished?) book about Tehillim (Psalms). In it, he describes the way music was used for soul healing in Temple times. 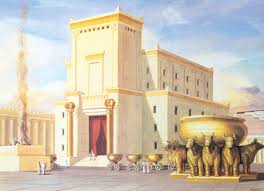 A Jew coming to the Temple with a sin offering stood facing the Kohen priest. The Kohen would look deeply into his eyes, tracing the path of this soul’s journey that led him to sin. The Kohen would signal the Levites to play a sad song, a song that would come as close as possible to breaking the penitent’s heart.

He kept a hand on the spiritual pulse, so to speak, tuning in to the moment when the Jew’s heart was pulled to its limits by this sonic medicine, and then, once again signalled the Levites. But this time, the Priest signalled that they should play a joyous song. One that would fill the emptiness of the Jew’s aching heart with beauty, with faith that every step of his path had to happen just as it did.

Wrapped in the majesty of the music, it suddenly became clear that everything he had gone through was worth it, to arrive at the beauty of the here and now that was born a hair’s breath from heartbreak. The Priest knew the precise spiritual prescription needed, and like a skilled doctor, he knew that even the best medicine can be poisonous in overdose. 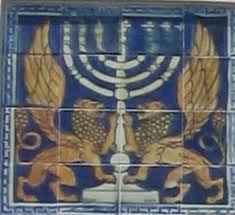 This evocative and moving scene of spiritual and emotional healing through music and faith is a far cry from the cult of personality surrounding much of today’s music business. Even our beloved, modest, and Torah-oriented Jewish musicians of today are several degrees of separation from the Soul Doctor Priest of Temple times. Still, every one of us knows how healing music can be when the right song touches the right heart at the right time.

The award-winning documentary “Alive Inside” for example, explores the healing power of music as used by Music and Memory, a nonprofit for which I work here in Israel. In thousands of programs across the world, elders and others suffering from dementia and mental illness are given a new access to their memories and aspects of themselves through the simple act of listening to the beloved songs of their past. I saw one woman who regained the power of speech after listening to her favorite music every day.

We don’t have the Temple in our times. The Priests and Levites no longer provide the healing environment that can transport us through and beyond our pain to the healing power of joy. Most of us don’t even know what we are missing. But as is written, “I will make a sanctuary in my heart”; and each of us now has a Temple within. 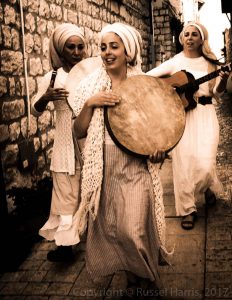 When we hear the music that resonates with our souls, there is a quickening. Music can reconnect us with our very souls, restoring parts of us that have been long lost. Perhaps this is the evolution and adaptation we are seeking: each person’s deep inner knowledge of the music that touches and heals his own soul, and the creation of a sacred space within the heart where the destruction of the physical Temple has left a void in our world. So perhaps this is the evolution of Jewish music: sound healing in the Sanctuary of the Heart.

Is there an essential element missing from this story? Perhaps another clue about Jewish musical evolution?

Rabbi Sutton describes an interesting Temple scene. A woman bearing a sin offering would go through a similar process to that of a man, but for one difference: The Priest would not look directly into her eyes, as this was considered an inappropriate level of intimacy. 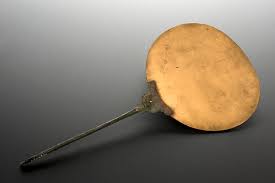 Instead, she would gaze into the copper sink, and the Priest would look at her reflection on its surface. This copper sink had been created out of women’s mirrors that dated back to the Jewish people’s enslavement in Egypt. The mirrors had been famously used by the women to seduce their downtrodden, despairing, and generally and not-in-the-mood husbands, to ensure the survival of their species (that is; the continuation of the Jewish people).

The copper sink was thus symbolic of an evolutionary adaptation to suffering (think: the ultimate lemons to lemonade), as well as a symbol of Jewish consciousness of the charged intimacy that can pass in the gaze shared between man and woman.

What is it in our generation that can explain an increasing, exponential, an unprecedented expression of women’s voices, and women’s music? It seems to me like so many copper mirrors reflecting the innermost journeys of our lives, our souls, our hearts. (please post your own thoughts in the comments).

I don’t claim to have all the answers. But I do know that our Jewish prophets described a future reality, a spiritual evolution, if you will, that is brilliantly explained by Sarah Yehudit Schneider in her book, Kabbalistic Writings on the Nature of Masculine and Feminine.

In this vision, the Divine Feminine is in a process of evolution from the time of Adam and Eve’s eating from the Tree of Knowledge. Increasing in stature over time, this evolutionary process will culminate in the masculine and feminine meeting, face to face. It’s reminiscent of the meeting between the Priest and Jew in the Temple. But with one main difference. Instead of a hierarchy of healer and healed, this face to face meeting is between two equals. 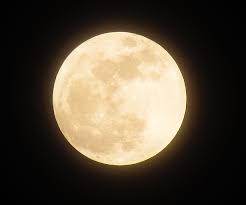 Instead of a gaze of intimacy that can lead to inappropriate connection, this is a gaze that is so intimate that it encompasses and surpasses the physical, to a vision of the soul. And in this redemptive light, the desire to possess another through objectifying her body becomes an appendage as useless and insignificant as the great ape’s tail. Wholeness becomes irresistible. Or in the words of Hanan Ben Ari, “Everyone will have a place to write his own story”

Perhaps Jewish women’s music is a part of this evolutionary unfolding. It is a challenge and a wake-up call. Can you hear your own heart’s song reflected in the copper mirror of my voice? Can we coexist in a great choir where there is space for each voice to be heard? Can the revelation of my innermost being be a shining light that helps reveal aspects of your own soul, long forgotten and silenced? Or will we go backwards, from Light (“Or” written with the Hebrew letter Aleph) to skin (Ohr, written with the Hebrew letter Ayin), and throw the Shechina (Divine Feminine) back to the dirt, silencing and objectifying holy women, or using sex to sell songs?

The wonderful husband and wife singing duo Yonina (Yoni and Nina) embody the holiness of this face to face meeting, and Nina is a role model for Jewish women who need to answer the call of their souls to sing out, without compromising the beautiful inner modesty of a true Jewish Daughter of Israel. Perhaps in matters of the spirit, unlike biological evolution, there is an element of choice. Not just between silence and praise. But the choice of how to let our voices, and our gifts, be an instrument for praise for the One who created everything. Cause even evolution is in His hands. As the psalmist wrote, “I will sing to G-d with my life”. And in the eternal words of John Lennon, “I hope someday you will join us; and the world will live as one.”

4 Replies to “The Evolution of Jewish Music”