I was so excited when I read the article detailing the discovery of what is believed to be the world’s oldest musical instrument. Any guesses?

Well, I don’t know about you but I sure got a thrill when I found out that our long-lost ancestors were playing flutes; made from bird bone and mammoth ivory. These ancient flutes are believed to be between 42,000 and 43,000 years old.
So why does this excite me? The flute is, to me, a microcosm of a human being: hollowed out, the air of breath passes through its interior; and a sound is created in the empty spaces. Any singer can relate to this; when I sing, the breath of air passes through me, and resonates in the hollows, both physical and spiritual, that exist within me. In fact, the very act of singing creates a kind of opening of internal space to allow something bigger than just me, to be expressed through me.
The Sufi poet Rumi often uses the image of the flute (nei), made from cutting a water reed, as a metaphor for human longing for our Source. In his poetry he describes the longing of the reed to return to its Origins as being expressed in the plaintive moan of the flute.
In Psalms it is written, “All of my essence will say, who is like You, G-d…”
כָּל עַצְמוֹתַי, תֹּאמַרְנָה— ה’, מִי כָמוֹךָ: מַצִּיל עָנִי, מֵחָזָק מִמֶּנּוּ; וְעָנִי וְאֶבְיוֹן, מִגֹּזְלוֹ.
(psalms 35, line 10)
The word essence in Hebrew is the same word as bones. The bones therefore represent something essential in the existence of a person. In fact, “atzmotai” in Hebrew can mean both “bones”, “essence”, and “soul”. 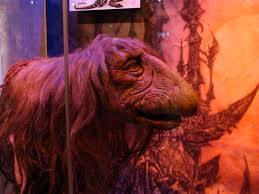 That is the reason that it is very meaningful to me that the first instrument may have been created from bones. In this light, playing music on a requisitioned bone becomes an act charged with layers of inference about ourselves and our role as humans; and expresses the ideal that our very essence, our very bones, were created for the transformation and return of the breath of life given to us by our Creator. The alchemical turning of breath to song.
G-d gave us our bodies and souls, and, when singing, and both are in harmony, the physical is elevated to the most refined heights of spirituality. According to the Torah, our souls are a “part” of G-d (who breathed breath into us), and the living soul can transform our very breath to something holy when we sing, whether it is words of praise, true words, or the highest: a wordless melody. 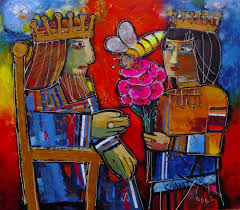 In the Torah, it is Yuval who is the first musician mentioned, although there is a tradition of singing that goes all the way back to Adam in the Garden of Eden. In fact, Kabballah teaches that song predates creation itself. Try to wrap your head around that one.
The Torah also describes a connection between prophecy and music. The prophets would often make use of skilled musicians to help them connect to G-d, receiving knowledge, understanding, and instructions that were beyond human limitations. The music allowed for this process by calming the prophets, expanding their minds, and connecting them to their hearts, beyond their minds, in order to be receptive to unusual experiences such as the Divine Presence dwelling within them and speaking through them. 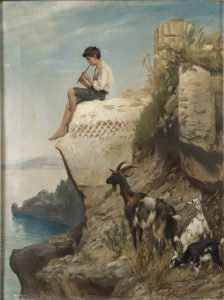 King David is the main author of the book of Psalms, which is largely agreed to be the poetry most often set to music in all of Western Civilization. With radical statements like, “I am prayer”, and “all my bones will say, who is like You”, David gives us the ultimate example of a very human man, who was able to turn his whole life into an expression of song and Divine Inspiration in the face of everything from tragedy to ecstasy.
Historians and Torah experts consider music to have been, for most of our history, a day-to day and essential element in Jewish lives from Biblical times. “I can feel it in my bones” is a modern-day figure of speech that describes the resonance with anything (a tune, knowledge, intuition, emotion) with the essence of our being. David’s songs speak to so many of us because he lived his life from deep in his bones, making his soul and his song one and the same. And, of course, his musical path began with a flute, as a young shepherd boy, alone with his flocks. And later, during the coronation of his son King Solomon, “All the people were playing flutes and exceedingly happy” (Kings I, 1:40).
I recently learned of a weird and wonderful discovery: Gorillas also sing! When they have found a great green patch to graze in, the Silverback patriarch begins a low humming tone reminiscent of the Mystics in the Dark Crystal. Soon the whole tribe is humming and singing along. 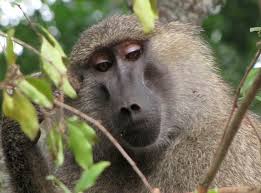 Once I had a strange dream. An ancient, ageless baboon was playing his own exposed rib cage. He himself had become the instrument. I woke knowing that I would seek this experience my whole life. That is why singing is so much more than a profession for me, so much more than a way to earn money, attention, fame, or society’s vision of success: it is an ongoing dream, a long song where my bones and soul are united in the transformation of my very self to G-d’s instrument. It sounds absurd to write but that is how it feels. And at those sublime moments where my monkey mind is quieted, and my song is born in the moment, the ladders of running and return carry me to realms of movement that transcend even emotion.
So next time you sing, try an experiment. Think of yourself as a flute. Imagine yourself as a network of hollow bones. When you sing, feel that invisible resonance within you. Feel how life feeds on life, creating more and more life force essence on the wings of breath. Feel the paradox of emptiness and wholeness. Maybe we will meet in an ancient, place, that Rumi shares with us in his poetry:
“Out beyond the realms of wrongdoing and right doing, there is a field. I’ll meet you there. When the soul lies down in that grass, the world is too full to talk about. I’ll meet you there.”
Spread the love